Spent the majority of the day travelling. Caught the 11am train to Boston. Four and half hour journey, train was pretty good compared to most in the USA, relatively quick too. Arrived at the hotel and then headed out to walk round the old part of town. 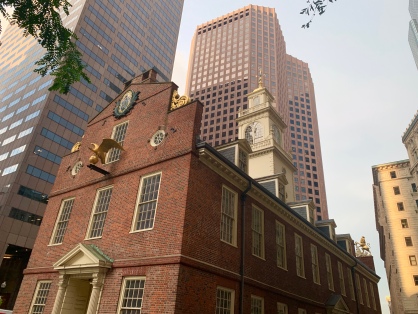 Headed up to Boston Common, past the Old State House and the new one too. It’s pretty steamy here like NYC but immediately it feels nicer. Less honking. Less screaming. Less grime. The metro works too. I have been here before, but that was in winter, and my overriding memory was never wanting to go outside so I don’t think I did very much!

Hotel is pretty cool, it’s called Citizen M and it has only been open two days. It is a ‘smart’ hotel, so you check yourself in on a computer and everything in the room is controlled by an iPad, including the heating, lighting and blinds. There’s loads of free movies too. It’s a pretty small room, good for one, but loads cheaper than most hotels in Boston, which seems to be very pricey.

Boston is blessed with two amazing art galleries and I visited both today. The Museum of Fine Arts and the Isabella Stewart Gardiner Museum, both within five minutes walk of each other.

The Museum of Fine Arts is truly world class. They have a huge collection of Monets, some fantastic 19th and 20th century American art, some beautiful Asian pieces, all in a modern, sleek, well presented gallery space. I spent three hours there, highly recommended.

The Isabella Stewart Gardiner Museum began life from a private collection she started with her husband. They created an Italian style mansion, over four floors, which they inhabited the top floor and the rest was opened to the public, in 1901. She died in 1924, and the entire collection was left to the public, with a stipulation that nothing could be changed. The museum is very unique, unlike any I have visited. It is like you are wondering around someone’s beautiful home.

Because nothing could be moved it can be difficult to see some pieces, as they hang on the sides of walls and you have to crane your neck to see them. Also some were stolen in 1990 but as nothing can be moved the empty fames remain, as they have never been recovered. They included a beautiful Vermeer and some Rembrandts. Overall a fabulous museum!

In the evening I stumbled across a great soul band performing outdoors (in video), so I sat and watched for an hour which was very enjoyable!

I jumped on the train this morning and headed north to the town of Salem, famous of course for the witch trials. I did learn however that the town was actually at times in its life the largest port and the richest town in the USA. A lot of trade from Asia came through the town. This led to the establishment of what is now the Peabody Essex Art Gallery. I had not intended to visit but I stumbled across it.

For a town the size of Salem if is remarkable to have such an amazing gallery. The focus is on both American and Asian art. Super friendly, great exhibition space, highly recommended. It never ceases to amaze me how that so many US cities have such fabulous art galleries with fabulous collections of world class art.

Of course the major reason for visiting the town is the witch trials, that happened here in 1692. Mass hysteria and paranoia led to many residents of the town to be accused of witchcraft, and also people living across the entire area. As you walk through the town there are many artefacts of what happened, including a graveyard and also a memorial listing each victim. There is also a tackier side, with witch this, vampire that, monster shops, etc.

It is actually a really nice town, compact enough to walk around, a nice harbour, a great veggie restaurant called ‘Alive’ too where I had lunch.

In the evening I saw a great film at the cinema called ‘The Farewell’. It is mainly in Mandarin, partly in English. Very interesting study of cultural Aandgenerational differences.

Last day here. Did some boring work things this morning, reality is looming! Then headed up to Bunker Hill, in the area of Charlestown. It is a large obelisk monument marking the Bunker Hill battle from the revolutionary war in 1775. You can climb 294 steps to the top for fabulous view across the city. I did just that and in 30 degree heat and massive humidity it almost ended me.

I also walked around the harbour area and saw the USS Constitution. Named in 1797 by George Washington, she is the oldest naval commissioned vessel still afloat.

In the afternoon I got the metro across to Back Bay, lots of posh shops here and also a Trader Joe’s my favourite shop, so I stocked up on supplies! I walked back via Boston Common to the cemetery where some of the earliest settlers of Boston are buried. This includes two co-signers of the declaration of American independence, Samuel Adams and Robert Treat Paine, as well as that revolutionary hero on horseback, Paul Revere.

I have enjoyed Boston, lots to do here, nice people, easy to walk around, great art galleries, come visit!

It is my last full day in the US today, flying back to Europe from NYC tomorrow. Have been in the US since I entered into Honolulu way back on 19 June! I always love visiting these lands, and have enjoyed getting to know new parts like Hawaii, Oregon and Washington. Til we meet again… See you in Helsinki.