Today I headed back to Honolulu and flew south to what is technically known as ‘Hawaii island’ but everyone seems to call it ‘The Big Island’. I had another car hired and they kindly asked if I would I like a convertible. After thinking to over for 3 milliseconds I said yes. brrm brrrm. It is a Mustang and very fun to drive! 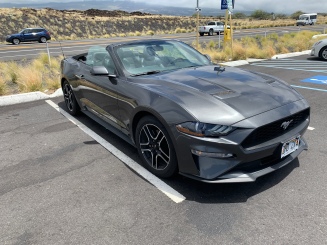 There are only really two towns one the island, Kona-Kailua and Hilo. I landed in Kona-Kailua and had a look around then headed north. I couldn’t check in til 4pm so I decided to tour the island. It seems that the west side has all of the beaches whereas the east side, where I am staying, doesn’t. However, I have had enough beaches for now so that was OK with me. I stopped for a quick break at Makelawena Beach and then headed across the centre of the island. The weather immediately changed and I had to put the roof back up due to rain, drizzle and fog! Like being back home.

I stopped in a lovely little place called Waimea and chatted to a woman who had spent part of her childhood in Yorkshire! Then arrived on the east coast and headed south towards Hilo, the other big town here. It is very noticeable the lack of people, and tourists here which is great. Also the landscape is very different, gone are the white sand beaches and huge green tropical mountains, replaced with black volcanic rock.

I am staying in an AirBnB, have my own little cottage in an amazing tropical garden with huge jackfruits, pineapples, avocados and lemons growing all around. At night you can hear the frogs and birds chirping and croaking and it is pitch dark too.

Today I did something amazing. I swam with turtles in the wild. I drove to a local swimming spot called Carlsmith Beach Park. It has very shallow water, protected from the waves by rocks so is the perfect place to swim. I thought it would be good but had no idea how good. After swimming around a bit I caught sight of some beautiful rainbow coloured fish, and shoals of all manner of tropical fish, which was great. Apart from the snappy beaky one that came swimming up to me in a rage and gave me a good peck and made my leg bleed!

Then a lady next to me said, ‘Hey, there’s a turtle’! and as I looked down underwater a huge Hawaiian green turtle swam beneath me! It was amazing. Over the next half an hour turtle after turtle swam around, beneath and past me. Some were huge, well over a metre long. It as such a privilege to see them, they are magnificent.

After that I am not sure anything could top my day, but I did some cool stuff. I drove into Hilo and had a look around. It feels very different to Oahu, lots more homeless people, more closed down shops, definitely more hippy and laid back too. I then drove to a nearby tourist spot called Rainbow Falls and then headed back south to a hippy town called Pahoa, as it has a cool veggie type wholefoods store.

I ended the day doing some volcano stuff! I found some lava-fied trees that were caught by lava and turned black and to lava ash which were cool to see, then I hit the south coast where all the volcanic activity was last year. You can walk across newly created lava fields, on land that didn’t exist before the eruption. There was also no-one there, so was great to have the place to myself. Standing on the rock hard terrain you really get a sense of the power of the forces that created the land. You can see lava flows that missed a house by a couple of metres, and the owners are still living there! Not sure I could be brave enough!

Tomorrow I am visiting the Volcanoes National Park to see the volcano up close and personal!

Started out early and drove 45 minutes south west to the Volcanoes National Park. As it is a National Park you have to pay to enter, $25, which pays to maintain the park. As I got there early it was pretty quiet. There are two ‘calderas’ there, which is the name for the floor of the crater of the volcano. The first one erupted last year and spewed lava for days, which hit the sea and destroyed 700 homes. It is still steaming and looking at it you can definitely feel the might of it and also the fact that it could erupt any minute. Luckily it didn’t.

I then walked about 40 minutes down onto the caldera of the other crater, which last erupted in 1959. It felt pretty amazing and weird to be walking across the top of a volcano! There is life there too, small plants and shrubs living amongst the hardened lava. Life finds a way…

Hawaii is a beautiful chain of islands but what makes it so special is the diversity of landscapes it has, from rainforests and mountains on Oahu to black sand beaches and volcanoes here. It would have been wonderful to witness active eruptions but at the same time terrifying so I was fine seeing what I saw!

I then headed back into Hilo as I fancied a swim. I started at Richardson Beach, known for its coral reef and fish. I did not know there were reefs here, and it was only about a five minute swim out to see it too. I saw some beautiful corals and loads of multi-coloured fish too. I then drove five minutes back to the beach I visited yesterday, Carlsmith Beach. No turtles today but loads of great fish again.

Lots more driving today, the car tells me that by the end of today I have been in the car for 14 hours! It really is the Big Island. I drove up north to a place called Waipi’o Valley. I did stop on the way at a few choice spots, one of which was this cool river which had carved a tunnel through a rock face and had become a waterfall.

Anyway, Waipi’o Valley is famous around these parts and often features in marketing for Hawaii as a tourist destination. It also has significance to generations of the first Hawaiians and apparently there are lots of burial sites in the valley. I did not attempt to walk down to the valley floor as I saw two people who had just climbed back up and they looked they had been run over. Twice. The views from the top were stunning, see below.

I then drove back to a small town called Waimea, a place I stopped at on my first day. A very nice lady chatted to be who owned one of the shops, admitting my Celtic knot tattoo. She had Welsh and Scottish ancestry so we had a chat about the homeland for a while! I gave her my blog address so she may even be reading this – hello!

Then I headed back to Hilo via a very windy and mountainous road. One minute it was sunny and then suddenly the fog rolled in and it was like driving across Dartmoor! Very eerie.

As I have done so much recently I decided to end my day at the cinema watching Dark Phoenix (X-Men). I have lots to say on this film but I won’t bore you haha!

Day 45 feels significant. In my mind I think I am away for 90 days so this feels like I have hit the halfway point. Also it is my last day in Hawaii before I fly out to California tomorrow. Am looking forward to being back in my hood again and staying with my best girl Liz.

Looked round Hilo again, chilled by the seashore, read my book, watched some mysterious weasel like animals running havoc and being attacked by birds! There are so many interesting animals here. In the park there were some beautiful vivid yellow birds twitching around. In my cottage there are loads of green and red geckos which I have learnt to tolerate as I can’t keep them out! At night there’s a chorus of all sorts of noise that does not stop until morning! My animal expert source (mum) assures me they are frogs.

Another thing I noticed today is how much freedom local children seem to have. Parents tend to let them do what they want, I saw a young boy about 3 years old running around today barefoot on razor sharp lava and having the time of his life!

I have enjoyed my time in Hawaii, I would recommend coming here in a heartbeat. Maybe slightly out of season as it is now hitting peak season and is very hot. I would have loved to have visited some of the other islands, particularly Maui and Kauai. Maybe another time. Hawaii really is unlike anywhere I have ever been, so green lush and tropical, with stunning landscapes and wildlife. You forget when you are here that you are marooned in the middle of the Pacific, about 5 hours flight from anywhere.

Heading back to Kailua-Kona tomorrow and flying to LA and the next leg of my adventure 🙂 Aloha!