Not much to report today almost entire day was spent travelling. Jumped ahead three hours. Staying in cool rented apartment with a separate lounge, washing machine and everything.

I headed out early to get to the Philadelphia Art Museum as it opened at 10am. Before you go in you walk up the famous ‘Rocky’ steps’. If you haven’t see the 1980s film it is where old Sly does a thing where he runs up and cheers or something. Can’t remember. There’s even a statue to him here as well! Bit OTT. Loads of tourists posing for photos impersonating him outside.

Well. What can I say about this museum. Fantastic! I spent three and a half hours perusing their collection and I loved it. Apparently they are expanding the museum in conjunction with a design by Frank Gehry. The bulk of the collection is European, Asian and American. They also had an impressionist exhibition on, all from their own collection, pretty amazing to see all in one place, including some beautiful Monets.

I particularly love Chinese, Korean and Japanese art and the gallery has some fabulous buddhas and early Chinese sculptures. They even had some Chinese tomb guardians that were virtually identical to a pair I saw in Tokyo. The American art collection was great too, particularly some fine portraits by Whistler and Singer Sergent. I am off to New York tomorrow and have already planned the four galleries I am going to see, so excited!

In the afternoon I visited the oldest part of the city. This included the Liberty Bell. I knew it was famous. I just didn’t know why. A guide explained they think it was rung after the signing of the Declaration of Independence, but was not called the Liberty Bell then. It was more around the time of the civil war, when abolitionists used the symbol of the bell as a rallying cry against slavery that it more popularly became known by the name we use today. As for the crack, it happened about 150 years ago and has never been rung since. Next to the bell hall is Independence Hall, where the declaration was signed in 1776. 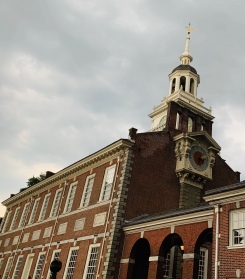 The other place I visited was the Museum of the American Revolution. It was very interesting and I learnt lots about the war that I had not known. For example, I did not know that it was the alliances with France, Spain and other European countries that ultimately won America the war. Before those countries became involved, Britain was close to defeating them. It was interesting seeing some of the oldest US flags ever made, learning about why the colonists had such a disagreement with the British and how a nation was ultimately formed. Great museum.

I ended the day treating myself to a great vegan meal at a restaurant called ‘Vedge’, highly recommended if you are ever in Philly!

Started the day by taking a train north to Penn Station in New York, pretty quick journey at 1 hour 20 minutes. Expensive though at $78, and considering the poor state of American trains and train services.

I opted to stay over in Williamsburg, next to Brooklyn, I last was here six years ago and stayed in Manhattan but fancied a new area to explore. Williamsburg is what you might call ‘up-and-coming’ or ‘in the process of gentrification’. Walk down the street and it is vegan bakery, drug den, macrobiotic greengrocers, brothel, locally-sourced shoe shop etc, you get the idea. My hotel is just to the north of the gentrification and is what I would call a ‘seedy’ area, but seems safe enough.

In the afternoon I explored the Brooklyn Art Museum. All museums here seems pricey to get in, think this one was $16 but I guess coming from a country where nearly all museums are free it would seem like that. The gallery is pretty modern and has some great pieces in its collection, including some nice Monets, a few Singer Sargents and a Picasso or two. As it is off the tourist trail it was also mercifully quiet.

In the evening I explored Williamsburg, heading down to the regenerated waterfront and watch the sun set. You can see some great views of the Manhattan skyline, it was a great way to end my first day here.

As was yesterday, it was baking hot and hideously humid today. The NYC metro is NOT the place to be on a hot day. It is like Satan’s lair. Add to the fact that the whole network needs about $1 billion invested in it, it is a pretty horrendous experience using it quite frankly. Plus there was engineering works!

Anyway, I did end up getting the ‘L’ to Manhattan and to the Metropolitan Museum of Art (The Met). It is quite a collection, it rivals the National Gallery in London or the Louvre in Paris for its diversity and depth. Again pretty pricey at $25 but you can use the ticket for three days running. Not that you probably would want to face the queues again! It is VERY popular.

However, that aside I spent over four hours there. The American galleries are superb with some fantastic John Singer Sargent portraits. There are also a series of rooms from houses across the last couple of centuries, showcasing the extravagant homes Americans built for themselves. The highlight was a lounge designed by Frank Lloyd Wright for a home in Minnesota from the 1920s, it was simply stunning.

The European collection is vast, with a number of Van Goghs, Monets, Turners and more. The Egyptian, Roman and Greek galleries are very popular too. It really is a fabulous place to see the development of world art, from many hundreds of years ‘BC’ right up to the present day.

The other gallery I visited was the ‘Neue Gallerie’ just up the road on Fifth Avenue. It has a focus on German and Austrian art, and on paper it looked good, as I visited an Austrian art exhibition in Japan and loved it. The gallery, not so much. Expensive, brief, uninspiring. No.

After all the art I needed to rest headed to nearby Central Park. I strolled along by the joggers round the lake and chilled on the Great lawn before heading with to the WB.

One thing I really dislike about NYC I am afraid are the people. It is the rudest most impatient city I have even visited and it drives me mad! People working in shops, cafes, restaurants are surly, rude and don’t smile. Drivers constantly honking their horns and screaming at each other. Why is everyone so unhappy? I’d genuinely like to know! I’ve spent time in other big US cities like LA and Chicago and it nothing like this.

Still not loving NYC but bits of it are good! Still boiling, everyone still grumpy and rude. Decided to look around the UN building as I read they do tours. But not on Sunday apparently. It’s Sunday. Wondered around what I think is ‘mid-town’ saw the Empire State Building, Chrysler Building and Grand Central Station, well the first two just from the distance. It’s quite hard to see them as there is always another skyscraper in the way!

Headed down to Battery Park, right on the southern tip of Manhattan. I was living my Madonna in ‘Desperately Seeking Susan’ fantasy! I went to where they filmed the scene where Roseanna Arquette knocks her head and loses her memory. That film was such a big part of my young life, I watched it countless times and it was part of my growing obsession with Madonna. I used to be be such a big fan I cannot even tell you! Down at the southern end of Manhattan you can also see the new ‘Freedom Tower’ which replaced the WTC after 9/11. I am not visiting the memorial as have done that before and was a pretty harsh experience.

The volume of tourists there however was astonishing, all queuing to get on both to see the Statue of Liberty. I just watched from afar. Back to the museums tomorrow, planning on visiting the Guggenheim and the Museum of New York, hopefully will be on safer and familiar territory there!

Day 84 – The Guggenheim Museum, the Museum of the City of New York, New York Central Library

Back on more familiar territory today with art and that makes me happy. Got to the Guggenheim at 10am so was pretty quiet looking around. It really is a stunning building. Opened in 1959 and designed by world-renowned architect Frank Lloyd Wright, it is one of the most famous galleries in the world. 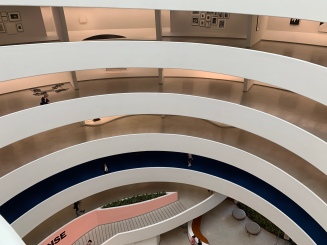 I read the best way to view the art was to get the lift to the top floor and work your way down. It really is the easiest gallery to navigate, as you walk down one massive spiral staircase all the way to the bottom. I was a little apprehensive that I would not enjoy the art, as it nearly all post-1950 and I struggle with abstract and surrealist art. However I actually really liked it. They had a great Robert Mapplethorpe exhibition, some beautiful Kandinskys and a fantastic Francis Bacon triptych.

Afterwards I headed to the Museum of the City of New York. I found out lots about the history of the city. Starting in the early 16th century, Manhattan was settled by the Dutch, and was called New Amsterdam. It was claimed for the Dutch East India company by explorer Henry Hudson (who the Hudson River and Hudson Bay were named after). However, in 1664 the Brits rocked up and said, ‘er we’ll have that thanks’ and just took it over! How bold.

It was then renamed New York, after the Duke of York. It is a very interesting museum, exploring in separate exhibitions subjects such as the history of activism in NYC and the Stonewall riots. New York rapidly became the second biggest city in the world, after London, and then proceeded the build innovative skyscrapers, building the Empire State Building which beacame the tallest building in the world for forty years.

I also headed to midtown and looked round some shops, then looked around the New York Public Library, made famous by Ghostbusters! I generally had a better day today, party because more people smiled and were nice to me! Maybe the weekend people were just having a bad day. Ended the day watching the sunset back in Williamsburg on the river.

My last day in New York today, moving on to Boston tomorrow. Had quite a weird time here, some great highlights in amongst some boiling weather and horrendous transport. Wouldn’t rush back here but would recommend the art galleries!