Not much to report. Travelled four hours by train back to NYC. As before it was very difficult traversing the city to get to JFK. Eight hours back to Europe.

Jetlag. My old nemesis. Been through the mill today with it. Landed about 10am Finnish time, headed into the city centre on the very efficient and well priced train. Oh how nice it is to have efficient transport again! Weather is about 12 degrees cooler too, raining too. Couldn’t check in so headed to the art museum til I could, would not normally go to a gallery feeling like this, does not help with the concentration!

I was actually so jet-lagged I went to the wrong gallery and only realised it was wrong when I was half way round! It was still nice tho. Main gallery is the Finnish National Gallery. I only know one Finnish painter, a print of whose I have hanging on my wall, Akseli Gallen-Kallela. It was interesting to see the history of painting here. It was only after the 1917 Russian revolution that Finland finally declared independence. A lot of this history of reflected in the art, finding an identity, getting over the war.

I had to force myself to walk around to stay awake so I strolled by the harbour area, stumbled across a big beach volleyball tournament, watched people swim in the sea and sat on the steps on the parliament building and had dinner. And it stopped raining and the sun came out too. Seems like a very nice city, though small. 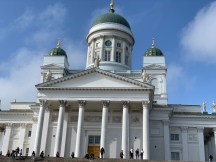 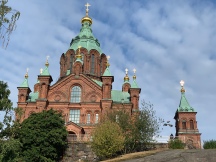 Started out with a wander around the shops, so many cool designs and fashion places. Spent an hour at the history museum, hadn’t realised how politically connected Russia and Sweden were to Finland. Finland only has a 100 years of independent history. Checked out the cathedral, which is situated on a hill and dominates the skyline.

Using your metro card you can use the ferry network too, so I headed across to a nearby island called Suomenlinna, which has a big fortress on it, cannons, museums, restaurants and lots of nice walks, and views. Only a ten minute ride, highly recommended. 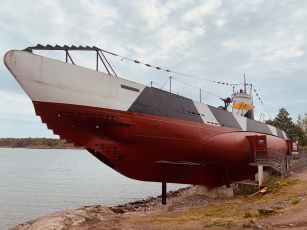 Me sitting on a cannon

Checked out my hotel and walked south down to Kaivopuisto park. A lovely spot looking out across the Baltic. I had coffee a lovely cafe and walked back into town through the area of Kaivopuisto, with views across lots of interesting looking islands, not sure of they are private or public.

Jumped on the train in the afternoon and headed two hours north to city of Tampere. I wanted to see somewhere other than Helsinki and my friends Jenni and Charlie live here, both of whom I know from Brighton. I say live here but actually it is in the sticks in a lovely rural area where they built their own house, where they live with their two boys Axel and Eliel.

Had a nice walk around the area and the sun came out too so we had an ice cream. Jenni made me try her liquorice ice cream, which was one of the most disgusting things I have ever eaten! It made me cough it was so grim. Finns are obsessed with liquorice but ice cream should not be combined with it IMHO.

Headed forty minutes into the nearest big town to where I am staying, Tampere. My first stop was the Moomin Museum! You might possibly think that it would be just for children, but it was actually a great museum for adults too.

If you don’t know, the Moomins were a series of books created by Finnish author Tove Jansson, in the 1940s to 1970s. The books were made into a TV series and quickly became a hit. I remember watching them a child so it was great seeing lots of the original artworks, tv programmes and stories behind the characters. It was a really interactive museum, highly recommended.

I then headed to Tampere cathedral. It is famous for having a some macabre skeleton frescos but it was also has some other beautiful frescos by the artists Hugo Simberg and Magnus Enckell. The cathedral last has some beautiful stained glass windows too, a very unique and peaceful place.

Spent the rest of the day wondering around the city, watched a Finnish rock band who had designs of being the next Rolling Stones and ate some blueberry pie (Finns are obsessed with blueberries).

In the evening I went with Jenni to watch one of her kids in an athletics competition, went to some Finnish shops, met some Finnish people and and played with some Finnish children. Finish.

My last full day on my trip and a nice round number to end on. 90 days away. Currently on a train back down south to the capital for one more day in Helsinki.

I then walked all the way around the harbour back to Cafe Ursula where I went earlier this week and chilled out there with coffee. In the evening I watched a huge choir perform in Senate Square as part of the opening night of the Helsinki Festival. Ended the day by doing some essential Moomins shopping! I have developed a liking for them so bought a Moomins spoon and two Moomin towels!

As I prepare to leave Finland, some general thoughts on the country and the people. It certainly has been a nice five nights here, everyone seems very friendly, it’s very organised and easy to get around. With a population of just a few million people it is also very quiet and has an easy pace of life. Definitely would recommend coming here and also getting further afield than just Helsinki.

So it’s happening all over again! Having finished my last trip away in February 2017, I am going again in May 2019. Itinerary this time is:

I’ll be blogging as I go so watch this space…